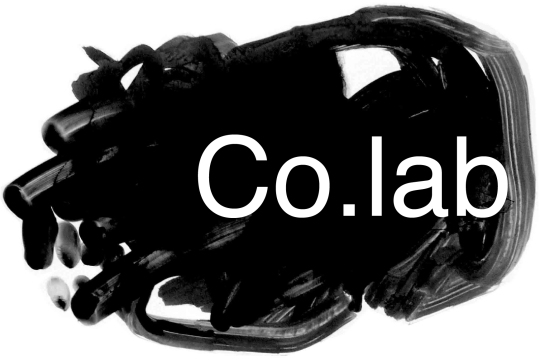 Mariya Nikorova–  Can you explain briefly the choice of the lab’s name?

Ж– The Labs name Co.lab is an abbreviation from the word Colirio, which means eye-drop. We also know about the New York based group- Collaborative Projects that started working with this name after 1977.

In Portuguese – also in English- to hear the word Colab is a kind of interruption in the speech flux, in this case in the collaboration word/speech flux. So to use this name is a kind of self-arraignment of our precarious and individualistic filmmaking and artistic practice and perpetual claim to change and to finally say: Let’s collaborate!

M– When was the lab established?  What was the primary catalyst for establishing the lab?

Ж– It’s always starting. The first moment was in 2011 ( I personally wasn’t living in Brazil in that moment) after a Labor Berlin workshop in Recife. Back to Brazil in 2013 I’ve noticed about this effort and started with, Amanda Beça,Lia Leticia, Kelly Saura, Silas Alexandre and the Jacaré Video members    (collective of 4 filmmakers) to articulate a new foundation of this lab. So we’ve join in a artist gallery that ceded a room and made a hand made caffenol processing. The film stock was a 16mm made by some students of a workshop I done some months before. It was a really interesting experience that helped to generate thought about what is to collaborate and what is to make films using differents procedures than another films produced in the State. Notice that Pernambuco- and it’s capital Recife- is one of the main cities producing narrative/commercial films with public funding. And along then there aren’t one ore two films made using analog film stock and processes. Even in this, two or three cases the procedure, research and also the laboratory processes were commercial and really expensive! The need to resist to this comercial/narrative/heteronormative film making practice – along with Labor Berlin workshop- maybe was/is the catalyst for Colab.

Ж – For now there are 4 of was working on film. The other are more interested in digitalization processes – Kinograph machine- or in think about a real collective filmmaking process. It varied a lot but there’s a email group which is active since the new foundation (2013). The interested and collaborating fluxes are heterogeneous just like life is. So those 8 persons – considering Jacare collective- come and goes, aggregate and disappears responding to our precarious and limited conditions of being all of us part of the “international immaterial labor field”, which here have a radical expression of it’s severe precarization.

M– According to what model are decisions made in the lab?

Ж– The decision are mostly made in a consensus form. Sometimes there’s no time for that process or no interest for a particular matter and it has no decision. I mean sometime this chaotic form of organization don’t make possible to make decisions and in this sense we lost opportunities.

M-How is the lab financed?

Ж– The Lab have applied to different kinds of funds – in the Pernambuco State there is a permanent fund program that I’ve already mentioned – but we never got any. So all equipment and spaces are self-financed.

M-What are the primary activities that take place in the lab?

Ж– For now I think that thought is one important activity. I mean to put attention in a   information about other filmmaking practices and procedures – that the public university here doesn’t teach for example. Or in our free time or also in ours day jobs to program, teach and of course make films. So to film using analog cameras to develop, paint and share knowledge about our practice is our primary activity for now.

M-What are the lab’s capabilities (what type of equipment do you have)?

Ж– Considering the international contexts there’s no unusual film practice.But if we consider the most of the other filmmakers in the local contexts, all collaboration, self-financing process in the ” production sphere” are unusual. Also the filmmaking procedures like the lack of script, non-narrative, use of notations, installations and expanded cinema proposals should also be considered something unusual here.Also one of our members is researching the kinograph digitalization machine and about the possibility to build process machine using 3D techniques.

M– How is the lab involved with the greater network (through traveling workshops or  screenings, multi-lab projects, online resources, etc) and how long has this involvement been going on?

Ж– Since the new foundation in 2013 we form part of the film labs email group discussion. From this moment one some members have been solving doubts about Cafennol and other processes; participating- or trying to- gather in the film stock orderings; using the network to develop filmworks, making residencies and visits to other labs etc. In 2016 we are trying to have a person in the film labs meeting in Nantes too.

Ж – We are again in a transition moment. The first intent to establish a fix space to work has failed and temporally the developments have been made in “personal” but yet public lab. Maybe in this year the gallery that we’ve worked in the Caffenol foundational process will start to house the Co.lab definitely.

M-Could you provide the lab’s logo and explain what it represents/how the design was chosen?

Ж– Attached there’s our logo. The decision has been made based in some options that we have. Also the possibility to use Xerox machines and to keep the quality of it is important to us.All allusion to film, cameras etc were avoided too. The was designed by Carla Lombardo.